Sign up to get some heard-earned knowledge, starting with my top 10 AWS mistakes.

When you start using AWS, the CLI becomes a very useful tool.

For the most part, the CLI is just making direct calls to the AWS API. However, there are tricks to help you become a true power user!

We'll start with some fundamentals.

When you first setup the CLI tool, you're told to run aws configure, but what's this command do for you?

Furthermore, the CLI configuration has the notion of profiles. This lets you run commands under different users and settings:

As stated, the credentials file let's you set the AWS key and secret key:

The config file is a bit more interesting. For each profile, you can set some defaults:

Here we see the default profile and the foo profile have slightly different settings, including a different default region.

You can change what format the CLI uses when returning responses. The format you choose can be personal preference, but some formats may serve you better when creating automations.

For example, returning json might be best for piping output to a tool like jq to do transformations or to reduce the result set to something simpler.

You might want to use text to do something like count lines of results, or use a type of table to see a nicely formatting table of results.

The formats you can use are:

By default on Mac and Linux, output from commands is sent to less. This lets you paginate through larger result sets, but can sometimes be annoying.

You can adjust this (for example to use more instead of less). You can also stop that behavior altogther and have it output everything to your console.

To adjust this, you can set the AWS_PAGER environment variable:

Or you can add this as a configuration option in ~/.aws/config:

You can add in any program name here that can read from stdin! For example, to have output sent to a new file in VSCode, use the following: 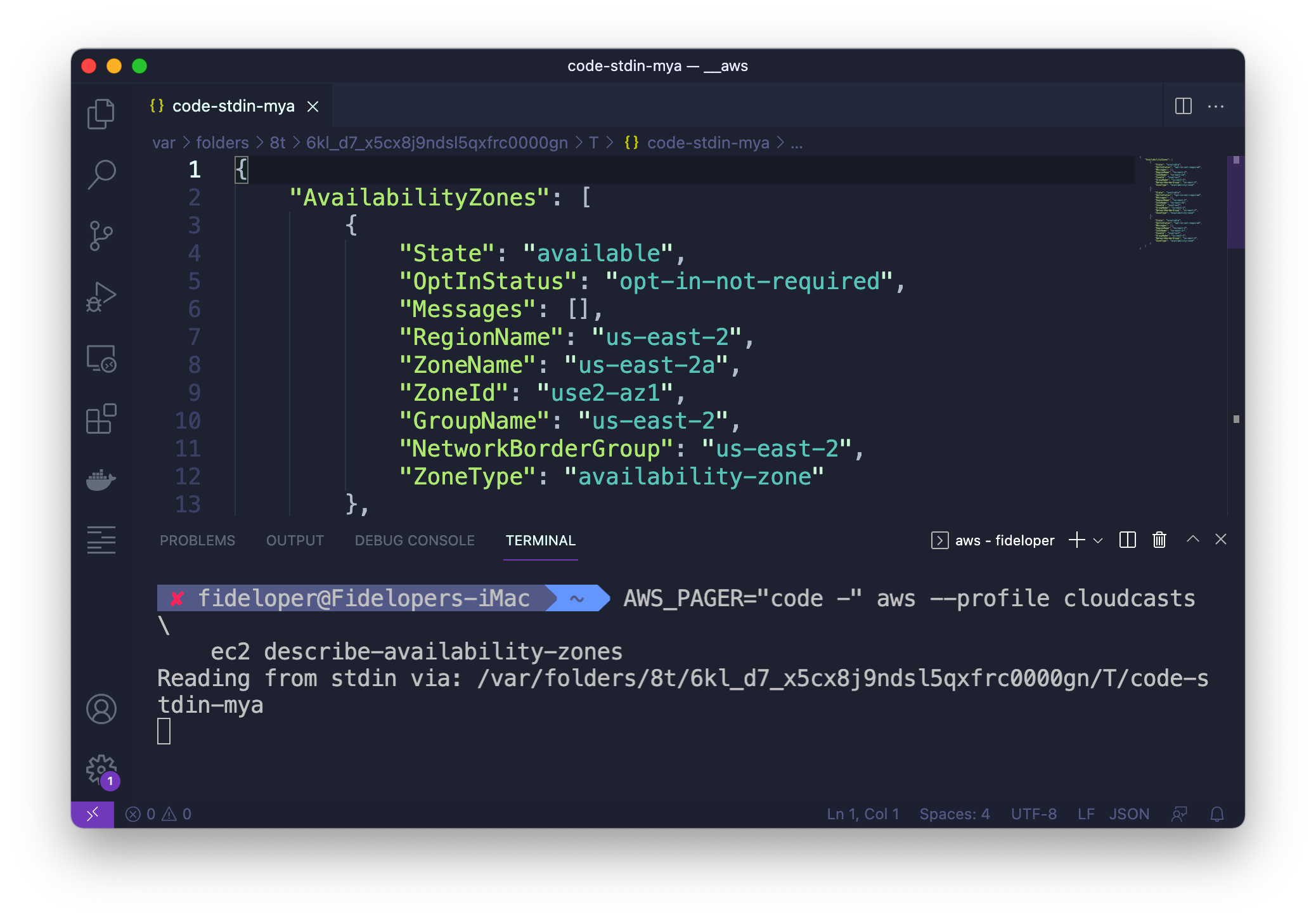 There are pagination-specific options as well, such as setting the results per page.

I use this feature the most.

All AWS CLI commands allow you to use the --query flag. This is similar to the jq command, but uses JMESPath. It can be used in conjunction with jq as well.

It's important to know that --query is not a filter (some commands have a --filter flag).

This --query flag doesn't work on the server-side, but instead on the client side. In other words, a filter takes the results return from the AWS API and will further query/filter/transform them on your machine.

This is especially nice where the jq tool may not be available (when outputting JSON), as it's built into the AWS CLI.

You don't need to be using json output for this to work either! For example, this works just as well (outputting tab-separated text output):

This feature is pretty neat! Version 2 of the AWS CLI has an interactive auto-complete that you can use to help run commands.

Additionally, you can use the value on-partial to have it turn on "conditionally" - with partial/incomplete or invalid commands. 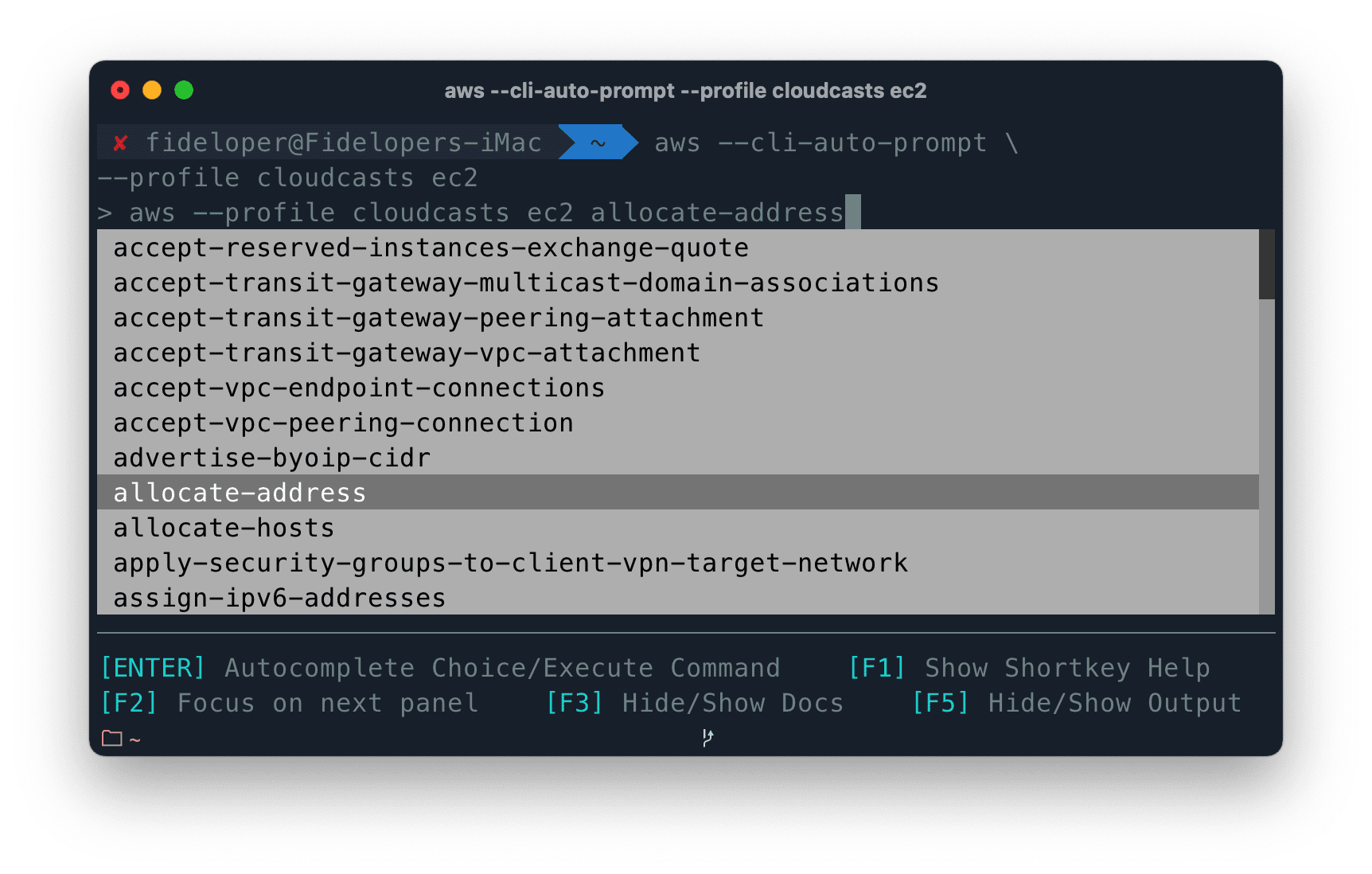 The AWS CLI has it's own history feature. This isn't necessarily useful in the same way you might use the Linux history command. Instead, it seems very useful for debugging.

While there IS a --debug flag, it is very verbose. I find the AWS CLI history command to be a bit nicer. It shows you the flags used in a given command, as well as the HTTP API request and responses. This is can be helpful to see why something isn't working as you intended.

You can enable it with aws configure set cli_history enabled, or by editing ~/.aws/config: